H1Z1 is due for a patch soon and a new video helps show off one of the game’s more controversial features, which is the much-talked-about airdrops and contested loot zones. The video does a fine job of showing the constant battle between players to get their hands on the latest and greatest loot, as well as the teamwork and strategy required to fend off zombies and rivals alike.

La vidéo est une gracieuseté de Speedyw03, as his team attempt to call in an airdrop and gear up against the zombie hordes and hostile players. Things don’t go quite as well as they had hoped. I should warn you, there’s a lot of NSFW language and jokes about stuffing fruit and vegetables in orifices where fruit and vegetables don’t usually belong… unless you’re into that kind of stuff.

I love the line near the end…

“We’re really butthurt kid, that’s why we’re throwing these insults at you and your clan.”

That’s the sure sign of a registered member of Recticare. Why? Because his rectum got wrecked and he’s going to need a lot of rectal care after that whooping.

I think it’s interesting how the group called in an airdrop but then totally got burned by the other group of pubescent-sounding teenagers. The entire call-in was just ruined from top to bottom. The foot chase that followed was just an opportunity to spew forth insults as the failed team secretly applied ointment from an open bottle of Preparation H.

Don’t worry fellas, maybe you can spread some “I Can’t Believe It’s Not Butthurt” on your toasted buns. In a way, the video does kind of prove that airdrops aren’t entirely pay-to-win. They may have called them in but they certainly didn’t win the loot in an uncontested way. It required some effort on their part and it ultimately failed.

Je pense toujours que H1Z1 has a ways to go before it reels back in the naysayers and doom-thinkers, but videos like the one above will help ease some people into thinking that it’s not quite as lopsided in favor of the “rich kids” as some of the Reddit threads and forum posts may lead you to believe. Skill, tactics and teamwork are still key for survival, as showcased in the video where the group above got ram-raided by a group of kids with bows and arrows.

Additionally, the team is working on fixing up some of the flaws of the game and they’re already prepping and dropping patches as articles like this are being written. You can check out the latest update from the official H1Z1 Twitter feed that acknowledges an incoming patch. 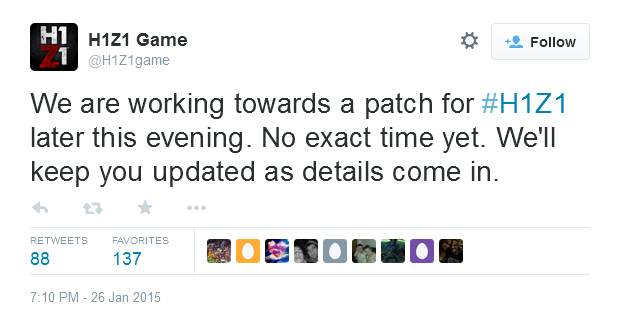