[Mettre à jour:] Brian Crecente has noted that it’s a volunteer position and that he’ll be disclosing the ties in his articles.

According to the dedicated digger and Twitter user Honkimus Maximus, à pastebin was put together that details multiple conflicts of interest between Polygon’s Brian Crecente and Games For Change. The issue is one of disclosure, or rather, a lack of disclosure.

The first instance involves an article published on Juin 23rd, 2016 called “Feminist Frequency editor calls out gaming’s straight male status quo at Games for Change”. The reference to the Games For Change event fails to disclose that Polygon’s founding editor, Brian Crecente, is on the advisory board for the organization. As evidenced on the Games For Change website, which has a biography entry and a listing for Polygon’s Brian Crecente. He also has it listed in his Profil LinkedIn, where he’s been on the advisory board since June of this year. 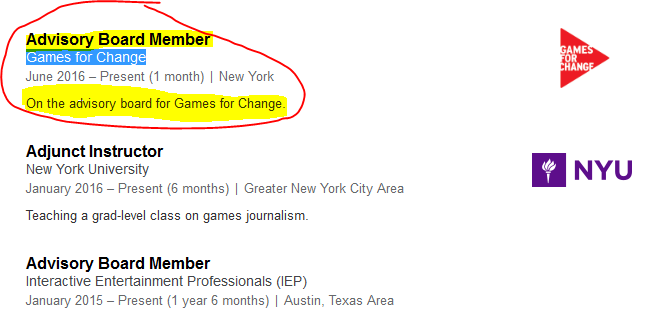 He hasn’t been on the advisory board for long, but once he joined the references on Polygon started popping up frequently, and without disclosure.

In fact, on Juin 22nd, 2016 there was an article by Brian Crecente himself about the Games For Change festival wherein he fails to mention that he’s on the advisory board.

Un jour plus tard Juin 23rd, 2016 Allegra Frank did an article on Polygon talking about Games For Change, but also fails to disclose that Polygon’s founding editor is on the advisory board.

And just today, on 24 Juin 2016, Brian Crecente opted to do an opinionated editorial about gun violence in games and his speaking engagement at Games For Change… of course, there’s no disclosure about Crecente’s affiliation with the organization. In fact, the word “disclosure” doesn’t appear in any of the articles where Crecente mentions Games For Change, which is baffling coming off the last two years where #GamerGate has skewered games journalists for simple things like not adding disclosures when talking about things they’re either professionally invested into or have some sort of business or financial association with.

To their credit, the staff at Giant Bomb have been frequently adding disclosures to their articles regarding close ties and affiliations to developers and organizations. And also to his credit, Patrick Klepek from Kotaku recently added a disclosure in his article talking about a developer who was romantically involved with Klepek’s cohort, Nathan Grayson.

Some gamers have decided to move on and move away from some gaming websites who have not been able to adapt and maintain basic journalistic ethics at their outlets. Select journalists at some outlets have been ardently striving to live up to the standards expected of them from the gaming community.